Read the full article on Crain's 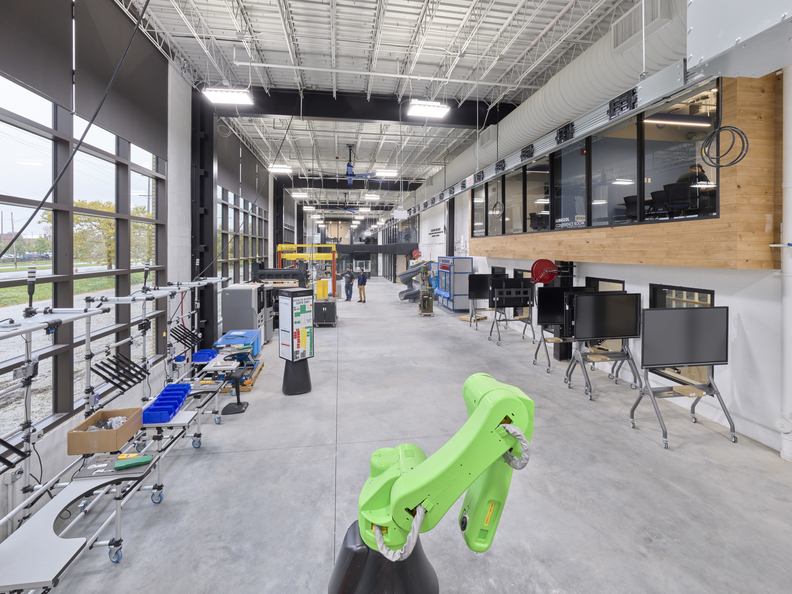 Roger Mastroianni | The purpose of the new headquarters is not just to serve as a new home for MAGNET; it's to highlight manufacturing careers and processes.

The heart of MAGNET's work has long been manufacturers.

But with the opening of its new headquarters in Cleveland's Hough neighborhood, MAGNET's scope is broader.

The new center is more than just a space for manufacturers to problem-solve and innovate. It's a place for the community to gather, for children to play and for students to learn, for adults to train for new careers and for, yes, manufacturers to explore new technologies.

MAGNET: The Manufacturing Advocacy and Growth Network secured the space for its new headquarters at 1800 East 63rd St. in the fall of 2020. Ground broke on renovations at the building, the former Margaret Ireland school, in August 2021. MAGNET moved in to the new building this October, with formal opening events held the last week of the month.

MAGNET today is guided by two things, said Ethan Karp, president and CEO of the nonprofit.

The first is the manufacturing community MAGNET is designed to serve and the "blueprint" they helped MAGNET create last year. The blueprint report, which looks at what manufacturers need to succeed into the future, includes a focus on talent, innovation, leadership, and digital and technology transformation.

"And so, everything emanates from that," Karp said.

The new building serves as a space for those manufacturers to get together as part of the workforce sector partnership MAGNET helps lead, and it exposes them to different technologies.

But the organization also considers itself values-driven. Those values aren't anything groundbreaking, Karp said, describing them as basically "doing the right thing with our community and our clients," "continuously improving" and "working as a team." But Karp thinks putting those values first and leading with them makes a real difference, taking the focus off MAGNET and putting it on what best serves the community. Sometimes that means MAGNET isn't the partner getting the funding or the credit.

"What matters is that we are actually making a difference to the number of jobs that are good in this community and the people who are actually able to lift themselves out of poverty and get those jobs," Karp said.

"Now this is practical for me," he continued. "This isn't just wishy-washy stuff."

Karp pointed to the work MAGNET did leading the region's Build Back Better application, which did not ultimately win federal funding. But people are replicating the process, which had people putting their "egos aside," he said. Collaboration has always been part of the conversation, Karp noted, but it used to be about getting a grant and then splitting up the funds. The focus now, particularly post-pandemic, is more on how to best use each organization's strengths together.

MAGNET wants to serve as a smart manufacturing and a manufacturing education center on a national level, but it also wants to be an active part of that local, collaborative economic development ecosystem, Karp said.

The new headquarters is, in many ways, a story of collaboration. Notable partners who are locating in the building or who helped design or carry it out include: the Cleveland Metropolitan School District, the Great Lakes Science Center, the Cleveland Metroparks, Towards Employment, the Cleveland Water Alliance, TIES, NeoSTEM and Women in Manufacturing.

MAGNET is an "important anchor" for the growing innovation district around its new headquarters, said Lillian Kuri, executive vice president and chief operating officer of the Cleveland Foundation. Kuri noted that organizations, including MAGNET and the Cleveland Foundation, are looking to work with members of the community in a different, intentional way throughout the district.

The Cleveland Foundation gave a capital grant for the manufacturing floor in MAGNET's new space, as it really captures the "spirit" of what the new district is supposed to do, Kuri said, which is to "bring everybody together around a common goal." 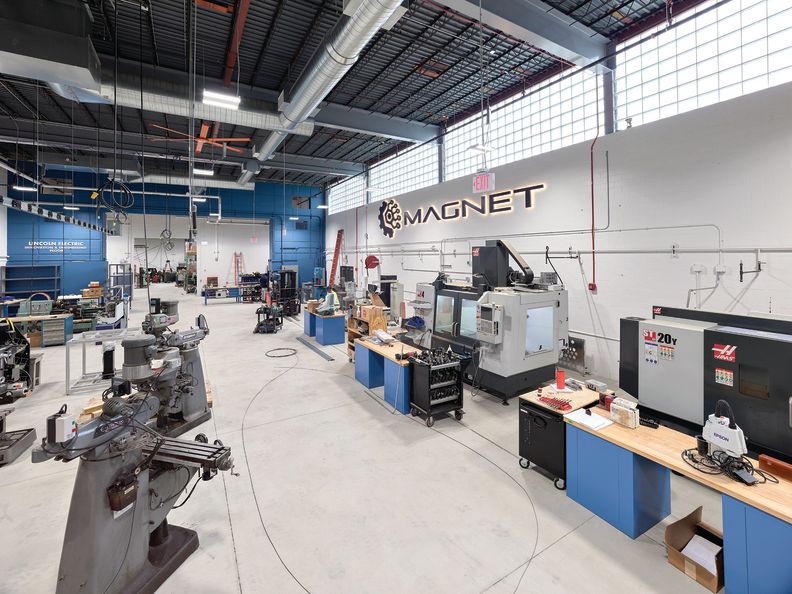 Roger Mastroianni | The new building serves as a space for manufacturers to get together as part of the workforce sector partnership MAGNET helps lead.

The ultimate purpose of the new headquarters is not just to serve as a new home for MAGNET; it's to highlight manufacturing careers and processes. For example, when students visit, they will be taken on a tour that includes a vehicle-making activity. But instead of simply making a toy car, students will vacuum form a chassis, paint it and make a set of design choices. Then, they will watch a robot put it together, mimicking modern manufacturing processes. The exercise won't end there, though. They'll each have a set role for their imaginary manufacturing company, from marketing to quality control. And they'll need to work together to solve problems presented to them — like labor shortages or supply chain challenges — in their initial design before their vehicle is ready for the market (or, in reality, a race along a ramp).

"So they will have experienced what we're trying to get here, which is the problem-solving of manufacturing, not just the engineering of a robot," Karp said.

The lab space with the car-making activity includes other technology for students to explore, too, from metal-bending to 3D printing, alongside informative signage with stats on careers, salaries and companies in those sectors. And the new building goes far beyond simulations. There's also a plant set up on the building's first floor, which can serve as a plant tour for students, or as a space to show off technologies and best practices to manufacturers. MAGNET can also create prototypes and host light production for startups in the plant, work it was doing in its old location in a much tighter space. MAGNET plans to host less office space for startups in its new headquarters, opting to instead co-locate a few partners, but production space is still a need for those small companies, Karp said.

Aside from the hands-on learning spaces in the building, the Cleveland Metropolitan School District and Towards Employment have traditional classrooms.

Towards Employment was already working closely with MAGNET as part of the sector partnership, providing curriculum and offering training. Now the organization is co-locating its industry partnership programming in the new building. Towards Employment has its own headquarters, but wanted to get its employees more embedded in the community, said president and CEO Jill Rizika.

The new building is both accessible and visible to the community, Rizika said. And that's important to help raise awareness of the industry as a career.

Even the building's lobby is designed for that. It will include kiosks displaying information about different companies and careers, a drink-pouring robot and an interactive wall to help participants explore manufacturing careers that may be a good fit for their skills and interests. Off the lobby, there's a room full of equipment designed to give visitors a chance to safely try some manufacturing processes for themselves: a virtual welding machine, an injection molding simulation and a small mill. The room also includes a photo booth where members of the community can take free headshots to be emailed to themselves, regardless of whether they're seeking a job in manufacturing.

Another space designed specifically for the community is the playground. At first glance, it looks like a standard playspace, with slides, swings and a basketball court. But manufacturing and other STEM themes are integrated throughout, such as in a bike that generates energy and a large lever that allows visitors to pick up a heavy basket of balls. And it faces a mural adorning the building highlighting "heroes of manufacturing" and painted by Cleveland artist Darius Steward.

The plant-filled upstairs, which overlooks the lobby and the manufacturing equipment of the first floor, features space for both office work and meetings. Offices today are different, Karp said, designed for collaboration and community. 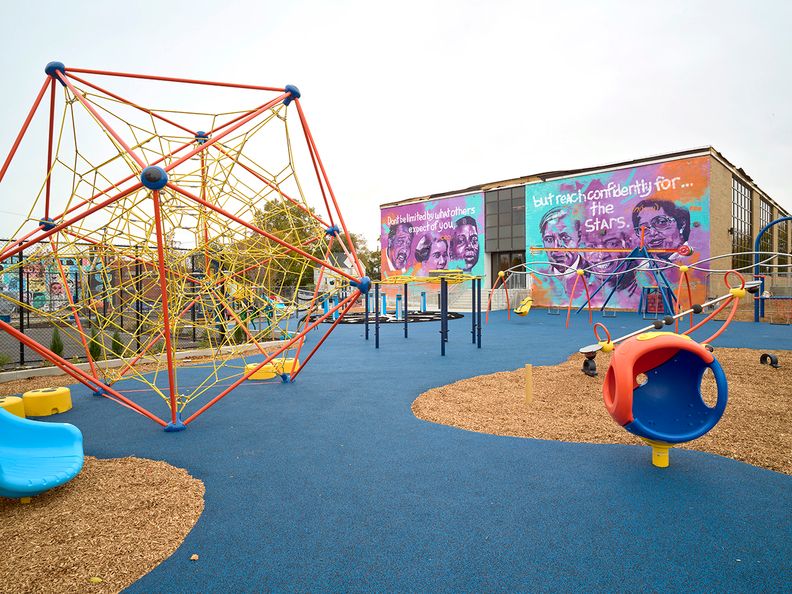 The new headquarters is inviting like most new spaces are, with fresh paint and bright lights. The layout allows MAGNET to spread out more than in its old building, which Karp said actually held more square footage, but with less workable space. But it's about more than that.

"We needed a new building. It has become clear, over the last year as we built it and especially the last month, as people actually come in and see the space, that it means way more than a cool space to them," Karp said. "I've seen manufacturers walk in and you can just see what we wanted to tap into is the pride. They beam. They say this is a place that represents us."

And the space MAGNET chose is meaningful, too. It's part of that larger innovation district growing in Cleveland. And it's nestled in a neighborhood, near CMHA housing and a center offering rehabilitation and reentry services. Those are populations Karp wants to reach with MAGNET's new center.

"I think there's a theme that runs through here, which is the same theme of the blueprint, which is hope," Karp said. "It's hope that manufacturers will take on the latest and greatest and create all these new jobs. It's hope for somebody playing on the playground that their future is up on that wall. It's hope for somebody that comes in here and sees a great career that will make more money than their family currently makes. And I think if there's anything that this symbolizes besides manufacturing pride, it's hope for a brighter future for people, for manufacturing and then for the entire region."